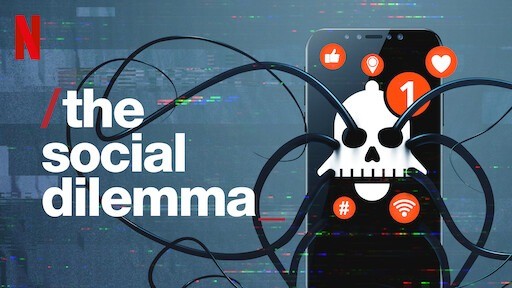 You’re mindlessly scrolling through Instagram, laughing at Bernie Sanders new meme after the US Inauguration.

Yet, behind this innocent activity, there’s a company that is tracking all of your moves and planning to use this information against you.

Now let that fear settle in and raise to 100.

That is exactly what Netflix' Social Dilemma achieved with their documentary.

The Social Dilemma is an interesting yet disturbing documentary put together in a well thought out manner. Interesting to see how it was constructed yet disturbing to see how many psychological techniques were used by the producers in telling their stories. This is something most individuals missed because it hits all the anxiety triggers experienced over the last few years. This makes it a very persuasive piece of media.

The content is compelling and frightening but also one-sided. The issues raised are serious and important, but not new.

The call to action is to put down your smartphone and back away, not slowly but immediately. Not only is that totally unrealistic, but it also leaves people less equipped and more afraid, especially during a pandemic when technology can be a lifeline.

A lot of intellectuals were interviewed in The Social Dilemma. Many were part of the team that developed the technology and processes they are currently avoiding and rallying against. The research and topics are hand-picked to push a lot of emotional buttons and activate a powerful mental model equating to social media with the stigma of “mental illness”.

By the time you hear all the experts, you lose sight of where the accountability should lie and what voices might be missing. You’re firmly in a state of panic and fear.

The documentary created dramatized narrative segments, where we are initially introduced to a family with clearly designated stereotypical roles. Their story humanizes the issues in ways the interviews can’t. It creates a journey for us to take and offers characters for us to relate to as it lays out the not-so-subtle signals of pending disaster. Through identification, presence and projection, a good story lowers cognitive resistance and makes us more vulnerable to persuasion.

Before you are shown a scene of the family’s drama, you are presented with an interview involving an authority figure or two. The interviewed individuals are smart, talented, and successful people who were initially involved in the creation of these technologies and how they work. This is a common strategy used in marketing communications to validate and persuade viewers.

Multiple behaviour research shows that individuals are easily susceptible to people in power or with perceived authority. Individuals will change their ideas and actions to align with someone whose opinion they value.

This documentary amplifies this influence because you are introduced to not one expert but a lot of them. Due to the continuous confirmation of the message by so many authority experts you are confidently convinced of the validity of information presented to you.

What you may also have not realised is that the interviews shown to you have a halo effect.

They are strategically placed to the emphasize the seriousness of the issue thus adding to the drama. As you progress through the scenes, it becomes clear that the drama is not separate, but an enactment of the dangers and dire consequences in the experts’ warnings.

A teenager who can’t go a few days without his phone and, once he gives up the challenge, quickly succumbs to its evils, distancing from friends, losing sleep, and trolling conspiracy videos. Thus, he sinks hopelessly into a cyber bubble and ends up at a protest which results in potential violence. He and his sister, who came to get him, are forced to their knees by a determined policeman, who didn’t seem to notice that the sister had parked her car in the street right behind them. This is every parents’ nightmare about social media. If you weren’t anxious already, watching these siblings get arrested is enough to get your adrenaline pumping and push you over the edge.

Human beings are automatically attracted by high valence and tend toward emotional appeals, whether positive or negative. Thus, emotions are powerful persuaders. They provide a link between us and the story. If you didn’t care about the story, it would have no persuasive power.

Emotion also enhances memory. The emotion of fear triggers an instinctive reaction: We are hardwired to pay attention and determine the level of threat to feel safe. The Social Dilemma is a well-constructed and articulately-argued threat.

Which then brings you to a different dilemma as you are just realising that you have been psychologically manipulated by a piece of media warning you about the psychological manipulation of other media. What you need to ask yourself is how will your next move impact the current digital era we’re living in.

And let’s be honest, every app we use is tracking our every move.

Coming from a background of Industrial Psychology, Rashika found her passion in understanding and discovering how the human mind works and feels during experiences. Now focused on designing elegant and engaging user experiences for people, Rashika works at strengthening client relationships and the way they think.

Connect with Rashika on LinkedIn: https://www.linkedin.com/in/rashika-rampersad-9966396b/

Category : Uncategorized
Previous4 goals for your CX team to thrive in 2021
NextCustomer Experience and Consumer Behaviour in a South African Context